A Brief History of Keyboard Instruments

300 BCE – The first keyboard, a kind of pipe organ, is invented in Ancient Greece. What else did you expect? The Greeks also invented Western Civilization!

1300s – The clavichord is invented. While popular for several centuries, it is too soft to use in larger venues. Listen to the first few seconds of Scott Joplin’s The Entertainer on the clavichord:

Not quite the same as a piano, is it? Learn more about The Whispered Spell of the Clavichord.

Around the same time, the harpsichord is invented. It also becomes popular (and is still used for recording keyboard music composed before the piano was invented). Unfortunately, it doesn’t allow the player to control volume through touch. Listen to The Entertainer on the harpsichord:

I think I’ll pass. Bach on the harpsichord sounds better.

Early 1700s – The piano (an abbreviation of pianoforte, literally “soft-loud”) is invented in Italy by Bartolomeo Cristofori. It’s a revolution in keyboard history, one-upping the instruments that preceded it. Unlike the clavichord, the piano can be played loudly. Unlike the harpsichord, it allows control of volume through touch. Here’s The Entertainer on the piano:

1800s – Until this time, on most keyboard instruments the large keys were black and small keys white: 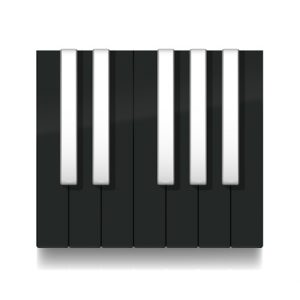 But this made it hard to visually distinguish the large keys, which adjoin each other. Well, it took a few centuries, but a solution was found – reverse the colors!

Late 1800s – After nearly 200 years of experimentation by thousands of designers and manufacturers, the evolution of the piano into its modern form is complete.

With the mass use of electricity, keyboard design then took a different turn…

Learn how the electric piano changed the face of music.

1935 – The popular and influential Hammond organ is introduced:

Learn more about the Hammond Organ.

1964 – The synthesizer appears, allowing the creation of novel timbres (sounds). Here’s just one of the infinite sounds possible:

1983 – MIDI (Musical Instrument Digital Interface) is invented, allowing electronic keyboards to communicate with computers and other keyboards. Before the Internet! And then…

What new innovations in keyboard technology might be coming our way? We’ll just have to wait and see!